Whatley Quarry Cleans Up Its Scalpings 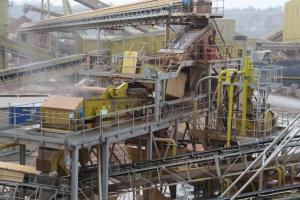 After one year of continuous use a scalpings washing plant installed at Hanson UK’s Whatley Quarry continues to successfully extract clean aggregate from scalpings for onward sale.

Nestled amidst the Somerset countryside on the eastern Mendip Hills, just outside Frome, Hanson’s Whatley Quarry – one of the largest quarries in the UK – produces on average 70,000 tonnes of Carboniferous Limestone a week. The rail-linked quarry, which supplies markets across southern England, operates on a five day production basis starting 6am and normally running until midnight.

Around 16% of face material coming through the quarry’s main crushing plant ends up as scalpings and the perpetually increasing scalpings pile was causing a problem at the quarry because production would be halted while this material was removed, which of course led to double handling. Hanson wanted a system that could wash the scalpings to extract clean aggregate so it would not merely keep the scalpings pile under control but also provide product for onward sale.

In the autumn 2007, new plant was installed at the quarry for this purpose and today the system continues to provided a solution that has proved itself to be successful not only in achieving Whatley Quarry’s requirements but also in working reliably on an arduous, double shift basis.

The system processes up to 220 tph of scalpings (up to 1500 tonnes a day) to produce a 4 mm washed sand; the popular 30-5 mm aggregate that goes straight to concrete plants almost as soon as it’s produced; 20-5 mm, which has found a big market in the Stratford City and Olympics developments in London and also 40-20 mm oversized material that can either be sold for sub-base material but is more often put back through the plant to screen it
down to the smaller sizes. 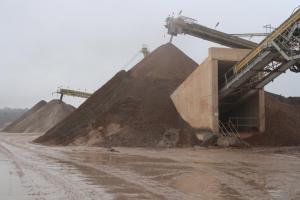 Hanson tasked bulk materials handling equipment specialist Centristic to design and build the scalpings washing plant at Whatley and the company acted as main contractor on the project, which saw the system being integrated to the site’s existing plant. With Linatex supplying the wash plant and Haith the effluent treatment plant, SP Services carried out the erection while the electrics were designed and installed by Tucker EMS, with the control system produced by Batching & Blending.

Installation of the plant was completed at the end of September 2007 and it has operated for much of the time since then on double shift – operating on almost a 24/7 basis – successfully recovering clean stone and sand from the quarry’s scalpings.