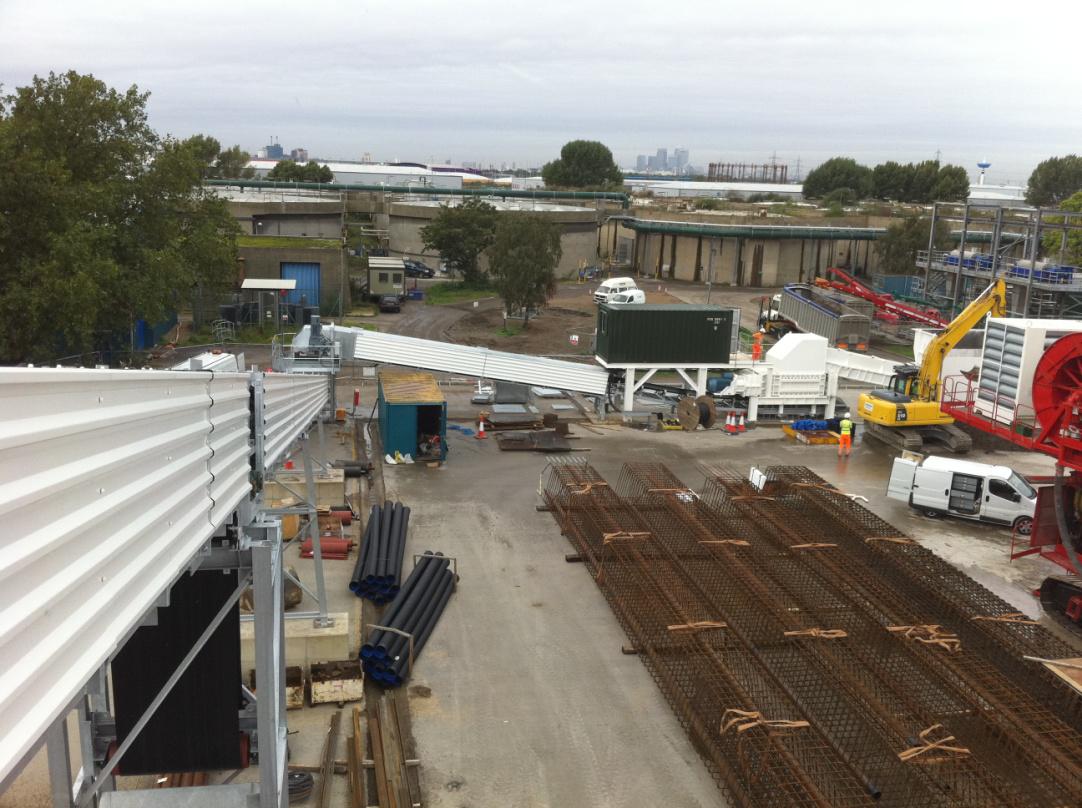 In May 2010 Centristic were awarded the contract by Burrows Brothers LTD to design build and install a handling system capable of handling the spoil from a tunnelling contract at Beckton Sewage Treatment Works (a Thames Water Facility)
The tunnel is designed as a new flood water overflow that will enable Beckton STW to process far more waste than it can currently handle and therefore reduce the amount of raw sewage entering the river Thames.

Initially the conveyor system will handle the spoil from the tunnel shafts before work on the 6.9km Ø7.5m tunnel starts. Throughout the 2year tunnelling project it is estimated that the system will handle 1.25Mte of material.
MVB (a consortium of Morgan Sindall, Vinci Construction Grand Projects and Bachy Soletanche) have the contract for the construction of the new tunnel. Burrows Brothers have supplied these companies with spoil handling systems before and Centristic were asked to design the conveyors required to integrate with a Burrows Brothers hopper and sizer that would result in a ship loading system. Due to the amount of spoil that the process was due to generate the material had to be removed via ships on the river and taken to Northfleet for processing. The system was required to keep up with the shaft sinking process and also the tunnel boring machine that resulted in 700tph handling capacity conveyors being used.

The tunneling process creates a wide variety of material that needs to be handled. The shaft dropping process creates a Bentonite rich, wet material that causes it to stick to the belt and chutes. Spoil from the Tunnel Boring Machine will mainly be either chalk with flint beds, or Thanet Sands. This material will all pass through a separation plant, with the majority being discharged through filter presses as a cake with a maximum moisture content of 30%. 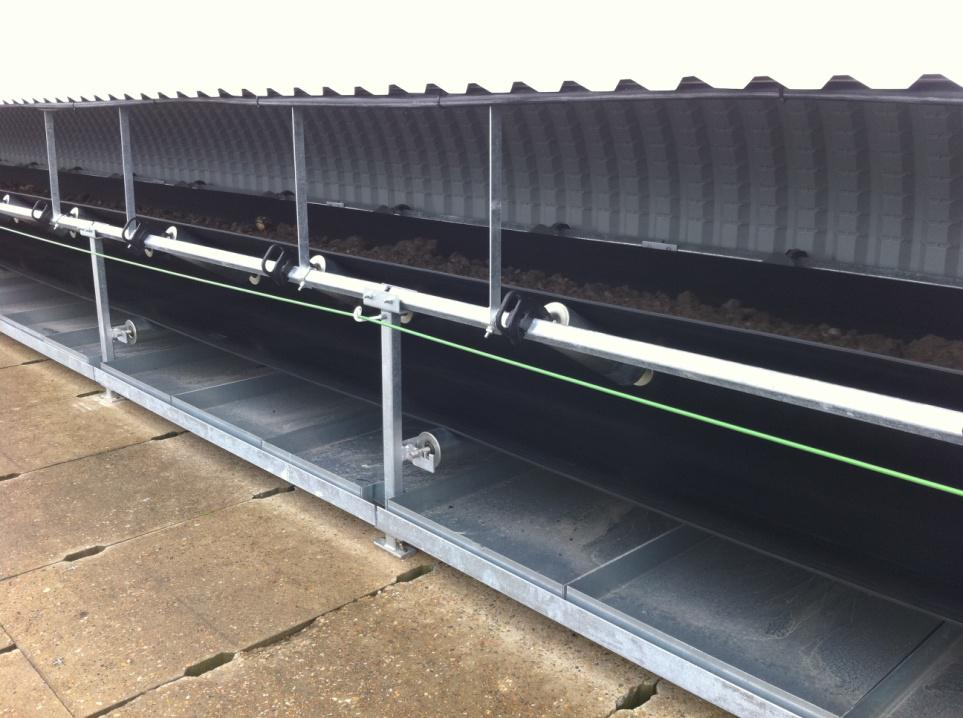 Burrows Brothers supplied the hopper and sizer unit that discharges onto the first of the Centristic conveyors. The 1200wide conveyor rises to discharge at right angles onto the next conveyor in the system that rises to an elevation where it can transfer and clear a site road. Receiving from the second conveyor, the third crosses the road before dropping onto the existing jetty.

Built in 1964, the exact design details of the jetty were unknown and it was specified by MVB that the belt be driven on the return side so that the weight of the drive unit could be kept off of the jetty. This was done with a bespoke drive unit that guided the belt around the drive drum to achieve over 230° of wrap.

The 194m long jetty was crossed using field conveyor, covers were fitted to keep the weather off of the conveyed material and to stop the wind having an impact on the belt. Underneath the conveyor, galvanized drip trays were fitted to contain any material that might spill from the belt thus preventing it from contaminating the river.
The last conveyor in the system (1500wide) is designed so that it can slew. This enables the conveyor to fill the ships move evenly, therefore making them easier and safer to handle. It also enables more material to be loaded per ship- this then reduces the number of ships needed and the consequent berthing times involved.  The slewing conveyor was designed so that it could be shipped to site in large sub assemblies. This was necessary as the conveyor was due to be installed over a 2day period through the use of a barge crane. Using a slinging team on the barge and an installation team on the jetty the conveyor went together quickly and safely with no hiccups.

Due to the harsh location of the system and the difficult and varied nature material being handled, the decision was made to galvanize all of the steelwork. The components were all similarly specified with epoxy finishes on the motors and stainless shafts in the zinc coated rollers. Burrows specified that Centristic used a Nilos Razor primary and secondary scraper on each conveyor and Stainless Steel chutes were used to make the flow of material as smooth as possible – as well as keep the return belt and transfer points as clean as possible.

The installation of the conveyor system was one of the first mechanical deliveries for the whole project. Centristic were able to deliver and commission the system (early October 2010) ready for use before the shaft sinking activities generated the spoil to be removed from site. The material that was shipped in for commissioning passed through the system well with some 500te loaded onboard without a problem.
The project gave Centristics new site erection team a chance to shine and shine they did. Throughout somewhat tough conditions the team maintained a consistently high standard in both the quality of the work that was being done and also in Health and Safety. With this being one of the first major installations on site all of the MVB team were watching and it should not go without note that Centristic came away with glowing reports and recognition from MVB for their performance in health and safety. 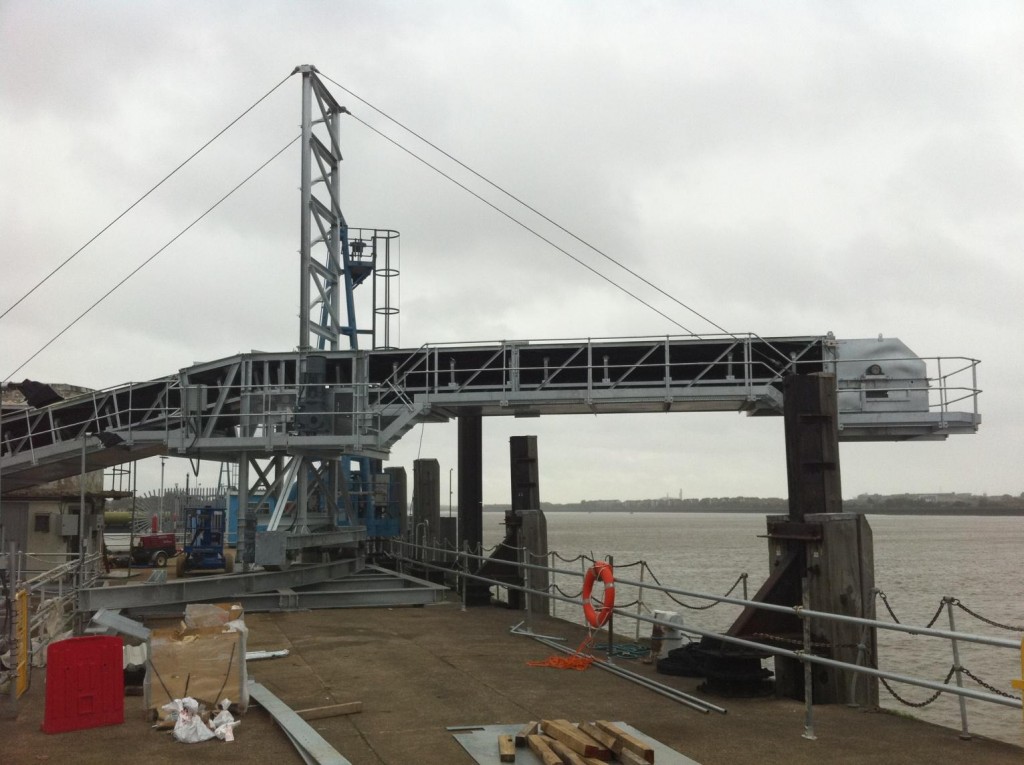 As with any project, there are lessons that can be learnt and Centristic worked closely with Martin Feeney (Senior Mechanical Engineer for MVB) and Michael Starsmore (MD of Burrows Brothers) in refining the design for this project and in designs for future systems to handle tunnelling spoil.
Since commissioning the Centristic Design Team have visited the system in Beckton see the system working so that they can further develop their abilities in designing systems to handle material of this nature and to further understand the requirements of such a system.
As bespoke material handling providers, no two systems are the same, but the experiences that are gained in each individual project are treated as learning exercises and serve to further strengthen Centristics services in the future. 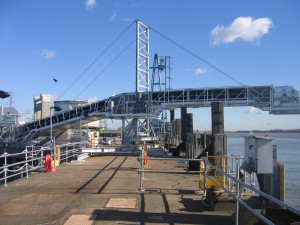 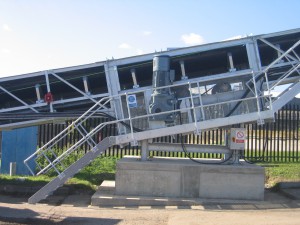 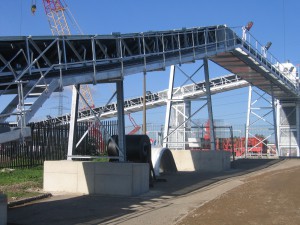 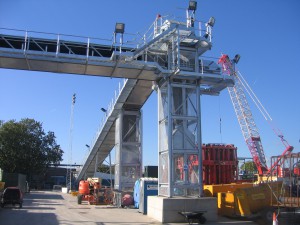 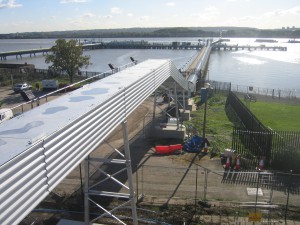 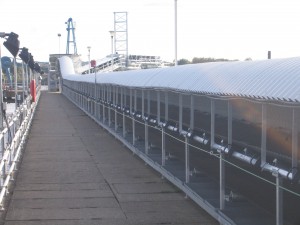 View of Lee Tunnel, Becton Conveyor 3 along the jetty 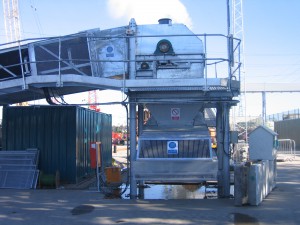