Aggregate Industries Limited, Blackhill Quarry United Kingdom operated a sand & gravel processing plant, with integrated crushing and screening. The plant was built in 2003 with a 25 year design life, and was designed to produce 430K tonnes of sands and gravels per annum, operating at 210 tonnes per hour utilising 420-440 m3/Hr of water delivering 11 products. It was the intention of Aggregate Industries to have the plant dismantled and transported to Hillhead Quarry, some 25miles North up the M5 Motorway and erected on new pre-determined foundations. 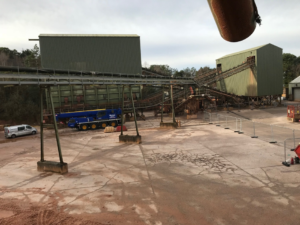 Original Blackhill plant prior to dismantling

Centristic won the contract in December 2018 to carry mechanical & civils aspects of the project, carrying out the roles of both Principal Designer & Principal Contractor under CDM regulations. The rebuilt plant at Hillhead needed to be able to mimic if not better the crushed stone / rounds production volumes of 210tph and be able to produce up to 150tph of sand, as per the original Linatex sand plant specification, when relocated to Hillhead.
Aggregate Industries are aware that at some future date following the completion of this project, the rebuilt plant at Hillhead needed additional plant and machinery to achieve the projected commercial sale requirements.
Blackhill – Centristic deployed their in-house site team to systematically remove, check and repair/replace all compromised steelwork and ancillary equipment throughout the duration of the dismantling phase of the project.
All steelwork was seamlessly loaded on to trailers for onward transportation to Hillhead Quarry for erection, on completion of each relevant civils phase.

Design – Throughout the design of the plant, Tekla BIM site were shared with the client so models in progress could be monitored, viewed and any necessary changes noted and addressed, The model was also viewed by all operators at Hillhead Quarry for everyone to comment on operationally, prior to full detailing and issuing for production.

Hillhead Quarry – The old processing plant at Hillhead was removed in 2008 when the site was mothballed and it was Aggregate Industries intention to put the relocated Blackhill plant around the area of the footprint of the existing plant.
Whilst the plant was being dismantled at Blackhill, Centristic & Aggregate Industries project management teams worked closely together to agree a suitable position for the plant to suit the topography of the site, prior to employing the nominated civils contractor. Borehole and geotechnical surveys were also carried out to agree final positions of the plant and to verify the stability of the ground to install the new primary building with access from the ancient pebble bed bank via a steel bridge decked with concrete. 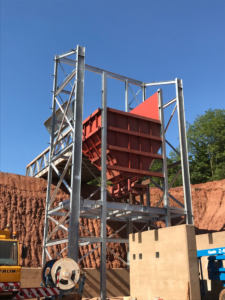 Various changes had to be implemented prior to the erection of the existing plant from Blackhill due to topographical and operational constraints. The main changes were as follows:-

Commissioning – Centristic successfully handed the plant back to Aggregate Industries after final commissioning, once all necessary grading and throughputs were achieved, in September 2019.

Commercial -The project was finished on time and on budget, the new plant is currently operating more efficiently than initially expected, with an improved throughput, seeing an increase in sand production, easily keeping up with sales demands. 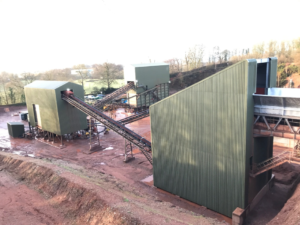